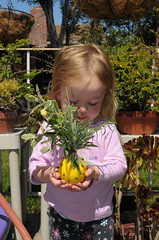 Pretty Pineapple Moth Ball
Originally uploaded by Katherine Donaldson
We have had moths in our pantry for quite a while now. A year? Six months? I'm not sure. They seem to like rice and grains, I'm not sure what kind of moth that makes them. We've thrown out infested grains, and moved to progressively more moth-proof containers, but there are still moths in our pantry. They aren't really enough of an issue to us to mount a serious campaign apparently.

Anyway, today I thought to look in Better Basics for the Home. There is a list of herbs to repel clothing moths, which these aren't but I bet they are similar, or maybe they are clothing moths, and they just ran out of wool. Anyway, I took a mishmash of herbs from the insect repellants and the moth repellant list and intersected that with what I have growing in my back yard. What we came up with was a lemon, cut with enough twig on the end to make a handle, covered in cloves from the pantry, with a corsage of two varieties of lavender, rosemary, and a lot of mint, because the mint is always taking over.

We stuck it in the pantry, and we'll see if it helps at all. It may drive Pam out of the house first since she doesn't like cloves, in which case it will have to go. The lemon may mold, in which case it will also have to go. Or it may dry and smell nice and drive out all the moths. I'm betting on one or two, but hoping for at least a little of three. And in either of the first two cases I can at least cut off the herb sachet and toss the clove-y lemon.
Collapse