Maker Faire was awesome, even if we did have to wait in traffic for over an hour and a half to get there. That was to go about a mile, so we could have walked SIX TIMES FASTER. Oy. If only we'd been willing to abandon our car on the one lane highway onramp... 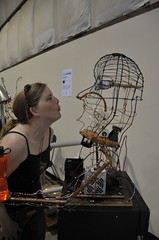 Sabrina Blowing into a teasing Breathalizer

There was a lot of great gizmos, robots, art, bicycles, clothes, yah. I exhausted myself trying to see everything, and only saw about half of it. I don't know if I could do it both days though, Jesse and I both ached by the end of the day. And it really messed up Rebecca's nap schedule. But I really wanted more. More! More time to make things, more uninterrupted energetic creative frenzy. 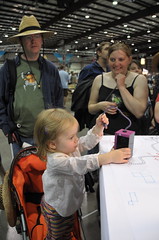 Rebecca had fun, she got to play with a Pleo, and this funky little monster synthesizer. She liked all the robots, although she refused to touch the giant giraffe. I think she also liked the giant vandergraph generator, although it made my head hurt. Pleo was the most convincingly emotional artificial creature I've met yet. I'd like to interact with one in a less crowded and noisy environment. I'm considering getting one for Rebecca's birthday, but what are the realistic chances it wouldn't get abandoned like those furbys? We always meant to mod ours, but I have a feeling it just ended up at Goodwill. 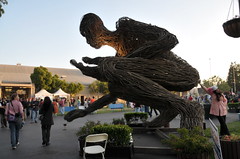 A lot of the sculpture (and robots) were very Burning Man. I'm sure there's a huge crossover. The big Giraffe had plenty of burning man stickers on it. (^_^) Also a large renfest crossover population? Anyway, I totally dig all of the steampunk esthetic going on. 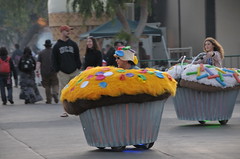 I think I need to build one of those cupcakes. The four of us could ride them to the farmer's market every Saturday... With a little mini-cupcake side-car for Rebecca of course. Like I have time for that. All of the custom bicycles were really inspiring too, I was sorry we got there too late to make it to the bicycle moding lecture. I'd like to make a plywood bike... Or one based on a couch... There was a pretty cool 20 person bike-bus making the rounds too. Mmm.